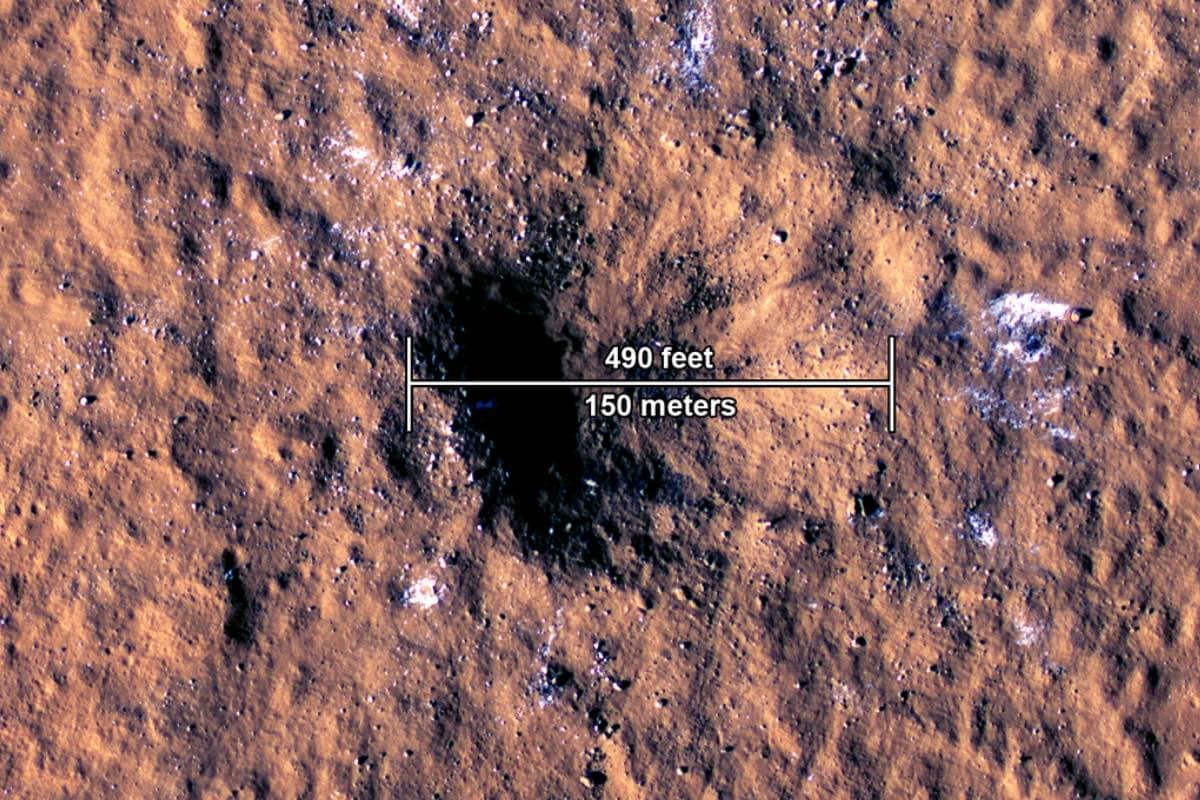 Two NASA spacecraft at Mars — one on the surface and the other in orbit — have recorded the biggest meteor strikes and impact craters yet.

The high-speed barrages last year sent seismic waves rippling thousands of miles across Mars the first ever detected near the surface of another planet, and carved out craters nearly 500 feet (150 meters) across, scientists reported Thursday in the journal Science.

The larger of the two strikes churned out boulder-size slabs of ice, which may help researchers look for ways future astronauts can tap into Mars’ natural resources.

The Insight lander measured the seismic shocks, while the Mars Reconnaissance Orbiter provided stunning pictures of the resulting craters.

Imaging the craters “would have been huge already,” but matching it to the seismic ripples was a bonus, said co-author Liliya Posiolova of Malin Space Science Systems in San Diego. “We were so lucky.”

Mars’ atmosphere is thin unlike on Earth where the thick atmosphere prevents most space rocks from reaching the ground, instead breaking and incinerating them.

The impact observations come as InSight nears the end of its mission because of dwindling power, its solar panels blanketed by dust storms. InSight landed on the equatorial plains of Mars in 2018 and has since recorded more than 1,300 marsquakes.

“It’s going to be heartbreaking when we finally lose communication with InSight,” said Bruce Banerdt of NASA’s Jet Propulsion Laboratory, the lander’s chief scientist who took part in the studies. “But the data it has sent us will certainly keep us busy for years to come.”

The incoming space rocks were between 16 feet and 40 feet (5 meters and 12 meters) in diameter, said Posiolova. The impacts registered about magnitude 4.

The larger of the two struck last December some 2,200 miles (3,500 kms) from InSight, creating a crater roughly 70 feet (21 meters) deep. The orbiter’s cameras showed debris hurled up to 25 miles (40 kms) from the impact, as well as white patches of ice around the crater, the most frozen water observed at such low latitudes, Posiolova said.

Posiolova spotted the crater earlier this year after taking extra pictures of the region from orbit. The crater was missing from earlier photos, and after poring through the archives, she pinpointed the impact to late December. She remembered a large seismic event recorded by InSight around that time and with help from that team, matched the fresh hole to what was undoubtedly a meteoroid strike. The blast wave was clearly visible.

Scientists also learned the lander and orbiter teamed up for an earlier meteoroid strike, more than double the distance of the December one and slightly smaller.

“Everybody was just shocked and amazed. Another one? Yep,” she recalled.

The seismic readings from the two impacts indicate a denser Martian crust beyond InSight’s location.

“We still have a long way to go to understand the interior structure and dynamics of Mars, which remain largely enigmatic,” said Doyeon Kim of ETH Zurich’s Institute of Geophysics in Switzerland, who was part of the research.

Outside scientists said future landers from Europe and China will carry even more advanced seismometers. Future missions will “paint a clearer picture” of how Mars evolved, Yingjie Yang and Xiaofei Chen from China’s Southern University of Science and Technology in Shenzhen wrote in an accompanying editorial.